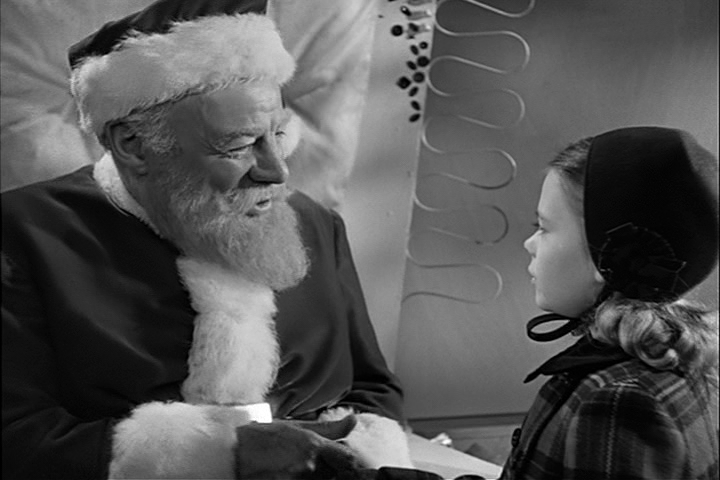 Justifiably one of the most beloved Christmas movies of all time, this film is a joyous celebration of how optimism, faith and a little magic can overcome skepticism and the loss of Christmas spirit. It’s also a story of romance, childhood hope, and the security of family for young and old. Most importantly, it’s here you’ll find the best Santa on the silver screen, bar none.

Doris Walker (Maureen O’Hara) is in charge of the Macy’s Thanksgiving Day Parade, and finds herself with the worst sort of dilemma in that job: a drunk Santa, staggering near his sleigh only minutes before the parade is to start. Thankfully, there’s another Kris Kringle (Edmund Gwenn) by her side, and he reluctantly agrees to take over, “for the children.”

It isn’t the last she’ll see of Kris. He quickly becomes a beloved figure at Macy’s, much to the chagrin—and amazement—of management.  Soon he’s also an asset with his unusual marketing plan. The only ongoing problem, and it’s an intriguing one, is his insistence he’s the real Santa Claus.

In the meantime, Doris has a few things going on at home as well. Her neighbor, handsome attorney Fred Gailey (John Payne) has become friends with her young daughter, Susan (Natalie Wood). It’s clear early on his friendship with Susan, while genuine, is also a ploy to get to know Doris.

His plan works, of course, but much to his dismay, he learns Doris doesn’t believe in Santa Claus, or for that matter, any “fairy tale.” She’s teaching her daughter the same thing, but Susan has a mind of her own. When Fred takes his young friend to Macy’s to visit Santa, while initially skeptical, Susan becomes convinced this bearded, gentle man is the real thing.

Others aren’t so sure, though, and suspect Kris is mentally unbalanced—to a point he ends up in court defending his sanity, with Fred as his attorney.

This movie is a fast-moving, dizzying delight from the first scene to the final image, with clever twists and humor that remains fresh.

The film won four Academy Awards, including Best Actor in a Supporting Role for Edmund Gwenn and Best Writing, Screenplay. It was also nominated for Best Picture, losing to Gentleman’s Agreement, another fine film that year.

Unlike many movies, this one didn’t use a set for the department store scenes. It was actually shot in the real Macy’s flagship store in New York. The work was done at night so as not to disturb regular business during the day. The scenes with the Macy’s Thanksgiving Day parade were from the real parade as well, including those with Edmund Gwenn riding in Santa’s sleigh.

Maureen O’Hara recalled initially being “furious” when her film studio called her back early from a long-anticipated trip to visit family in Ireland. However, upon reading the script, she immediately changed her mind. Over the years she remained proud she was a part of Miracle on 34th Street. As would John Payne, who, until the time of his death, wanted to make a sequel to the movie, going so far as to write a screenplay.

In her memoir, ‘Tis Herself, O’Hara wrote, “I don’t think I will ever tire of children asking me, ‘Are you the lady who knows Santa Claus?’ I always answer, ‘Yes, I am. What would you like to tell him?'”

The film has been re-made several times over the years, most recently in 1994 by John Hughes. The last remake was a darker take on the tale, and while much of the basic story line is the same in that movie, the spirit is very different.

Whether or not you believe in Santa, or celebrate Christmas, for that matter, this is a film all classic movie fans should know, and modern movie-goers can enjoy as well.

The trailer for Miracle on 34th Street was a little unusual. The movie was released in May, so the Christmas theme wasn’t mentioned in the trailer, which as a result doesn’t do the film justice at all today. Instead, here’s a clip, “Santa Won’t Lie to Susan”: