Anna Karénina (Greta Garbo) is bound in a financially and socially comfortable, yet deeply unsatisfying, life at home with her husband of ten years, Karénin (Basil Rathbone), and the son she adores, Sergei (Freddie Bartholomew). She wistfully, if somewhat indirectly, relates her feelings of malaise and longing to young Kitty (Maureen O’Sullivan) moments before she meets the dashing Count Vronsky (Fredric March). From there her life is changed forever.

Time and again, Anna and Vronsky defy society with their clandestine and illicit meetings. Gradually they are less discreet, and she is warned by her husband to stay away from the Count. Captivated by the intensity of her feelings, Anna makes a decision that has consequences she had been cautioned were inevitable, yet chose not to believe.

The restraints of bringing Tolstoy’s tome to the screen in little more than ninety minutes are offset by fine performances, stylish set decoration and costuming, and deft direction from Clarence Brown. The result, while not epic, is opulant and moving.

The movie was well-received critically, and did well in the box office, although it was met with mixed feelings by the general public. The London Observer‘s film critic wrote, “it is handsome and dashing, with enough social sense to present divorce as a problem to an age which has come to regard it as a commonplace.” 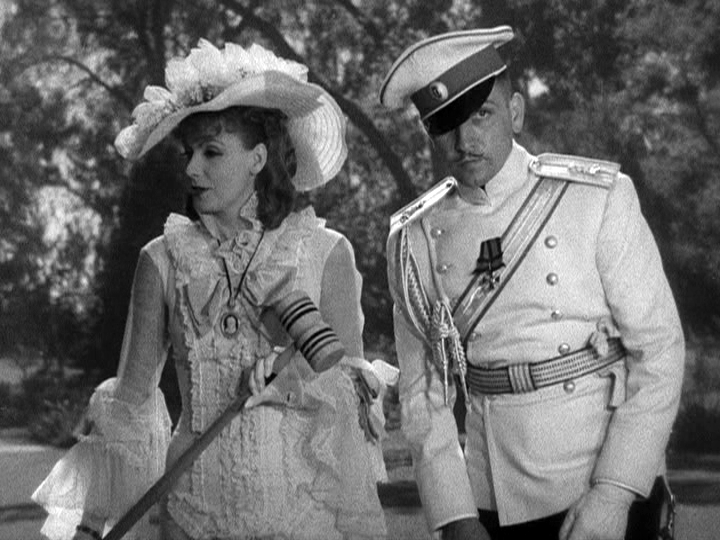 A superb actress, Garbo’s experience in silent films served her well in Anna Karénina. Her final scenes in particular are subtly nuanced yet fully expressive, with all that is in her heart seen in her eyes, and barely a word said. She is the strength of this film. As the aggrieved husband, Basil Rathbone’s performance is taut and precise. While you may not have sympathy for the man, you understand his point of view. In contrast, Fredric March is perhaps not as compelling, but does not take away from the power of the story.

Dissatisfied with the way the adaption of Tolstoy’s classic had been handled in 1927 in a silent version of the tale titled Love, Garbo had long campaigned for another opportunity to bring Anna Karénina to the screen. She was met with resistance from her studio, yet remained undeterred until they gave in.

Anna Karénina has been remade several times, and each version is a reflection of the era in which it is produced. The story, however, is timeless, and was brought to the screen in 1935 in a powerful manner, making this classic film one of the better movies of the early period of film making.