Brassy Billie Dawn (Judy Holliday) is the girlfriend of boorish junk dealer Harry Brock (Broderick Crawford), who has taken her with him to Washington, D.C., where he hopes to influence various Senators in a bid to strengthen his business. Brock is convinced Billie’s unrefined ways will harm his efforts, and he hires newsman Paul Verrall (William Holden) to teach her culture and improve her image.

Brock is ignoring his own shortcomings, however, while Billie becomes increasingly aware of them. His belittling manner toward her doesn’t go unnoticed by Paul, who is falling for Billie. What Paul doesn’t yet know is how important she is to Brock, not because of love so much as financial interest, for most of Brock’s holdings are in Billie’s name.

The film was based on the popular play by Garson Kanin, which also starred Holliday in its Broadway run. The film’s producers were reluctant to use her in their production, and first considered a number of other actresses. The turning point in their decision to cast Holliday apparently was her performance in Adam’s Rib, also co-written by Kanin. Katharine Hepburn, star of that film, made sure Holliday’s scenes were essentially a screen test for Born Yesterday.

Holliday won the Academy Award for Best Actress for her performance. While she did a wonderful job with the role, it was not of the caliber of other nominees, in particular, Bette Davis for All About Eve. Davis was expected by many to win the award, but Anne Baxter, whose role in that film was a supporting, not lead, actress part, was also nominated for Best Actress. Many believe fans of the movie split their vote between the two actresses, costing Davis the award. Gloria Swanson was also nominated (for Sunset Boulevard), and while her performance was more award-worthy than Holliday’s, the dark nature of the film may have worked against her. 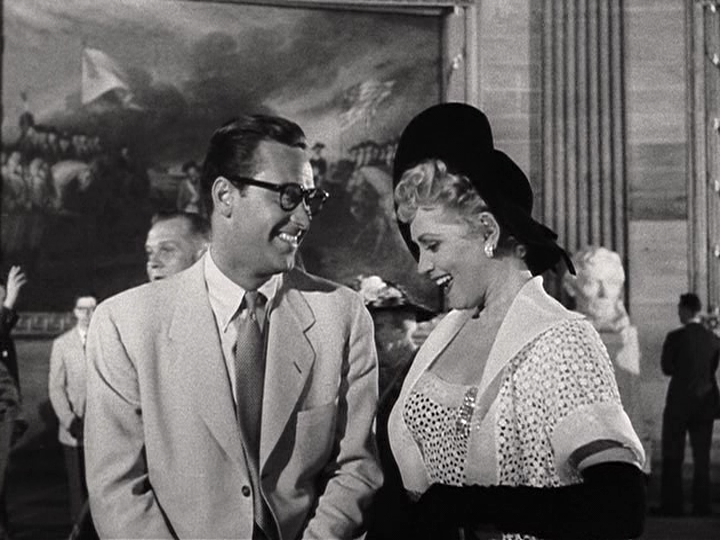 In addition to Holliday’s award, the film was nominated for four other Oscars: Best Picture, Best Director, Best Writing — Screenplay, and Best Costume Design, Black & White. It lost all four to All About Eve.

It is difficult at times to watch Brock’s violent treatment of Billie, and it can be uncomfortable watching Billie awkwardly try to fit in when she clearly does not. Those latter scenes were played for comedy, but don’t always work as intended. What does make this movie worth watching are the scenes between Holliday and Holden; they are sweet and poignant, and pivotal to the change in Billie.

Born Yesterday is a good film, and one with a strong presence in popular culture. It, sadly, remains relevant today in its portrayal of an abused young woman, but her growing strength and awareness of her own worth makes it worth the watch.