It’s the Stanhope’s third anniversary, and husband Jake (Clark Gable), known to his colleagues as Van, has given his loving wife Linda (Myrna Loy) a diamond bracelet. Jake has just returned from vacation, and everyone in his life, it seems, is glad to see him again.

It’s quite clear the saucy Linda is the happiest, especially after a night of romance with her loving husband.

Other women in his life are pleased he’s back as well, including his secretary, Helen (Jean Harlow), who goes by Whitey. The two seemingly have a chaste, professional relationship, and Whitey has a serious boyfriend, Dave, (James Stewart), who works hard to keep her happy. Despite the clear lack of any danger signals, Linda’s mother Mimi (May Robson) sees trouble—and the experience and instincts of age may be working in her favor.

When Jake is faced with a sensitive business dealing, he’s forced to keep everyone except Whitey in the dark about his plans. The stage is set for one misunderstanding after another, and of course, that’s exactly what happens. 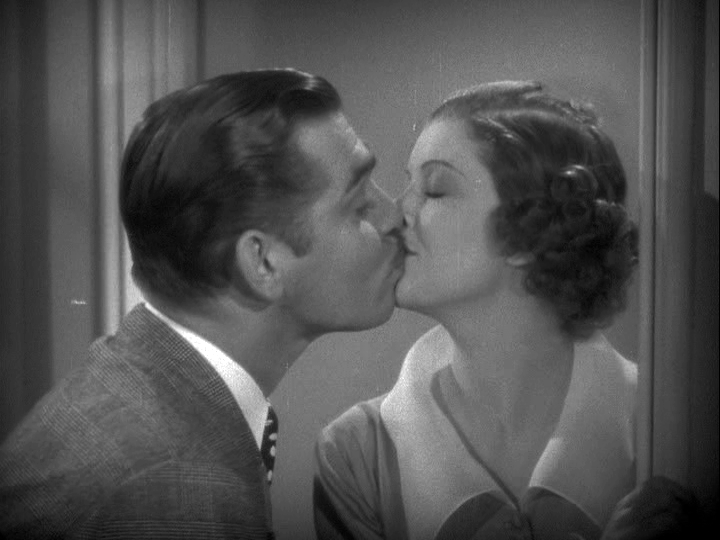 Myrna Loy had a great deal of affection for her female co-star, Jean Harlow, who was looking to change her image. “She wanted to darken her hair a shade, in hopes of toning down that brash image. It worked. She’s really wonderful in that picture and her popularity wasn’t diminished one bit. We did kind of a reversal in that picture. Jean stayed very proper, while I had one foot in bed throughout.”

Loy also spoke to Clark Gable’s sex symbol status. “Clark suffered so much from the macho thing that love scenes were difficult. He kept very reserved, afraid to be sensitive for fear it would counteract his image.”

The New York Times critic generally praised the film, with some hand-slapping about placing Loy against Harlow in a battle for a man, saying Loy “enters the ring with glazed eyes, a crutch and one hand strapped behind her back—metaphorically of course.” As brazenly sexy as Harlow was, that imagery may not hold up today, when Loy’s appeal is perhaps more fully appreciated. Overall, the Times critic wrote,”the film has been richly produced, directed competently by Clarence Brown and is well played—within the handicaps of their roles—by Miss Harlow, Miss Loy and by Mr. Gable.”

This film showcases some of the top talent of the day in a pleasant comedy filled with innuendo and yes, a predictable ending, but one that’s entertaining in the path to that end. The value is in the cast and their strength on the screen, as well as a decent script and solid direction.