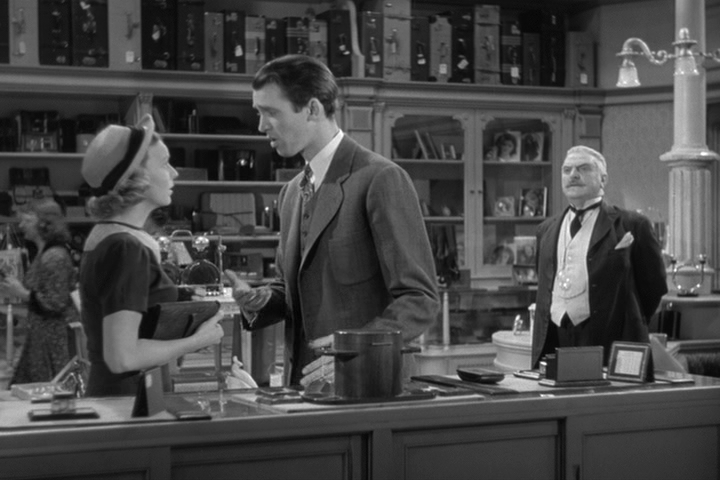 One of the most charming and disarming romantic comedies ever made, The Shop Around the Corner is a story of two co-workers seeking both romance and security, neither knowing the other is the one to provide it. Both believe they’ve found love with a mystery pen pal, unknown persons who possess all the desired qualities.

Alfred Kralik (James Stewart) is constantly at odds with fellow sales clerk Klara Novak (Margaret Sullavan). They work at Matuschek and Company, a Hungarian shop that sells such goods as suitcases and musical cigarette boxes. Each has been corresponding with someone they gratefully say is nothing like the other, and they’re both anxious, yet hesitant, about meeting their correspondents.

In the meantime, shop owner Mr. Matuschek is shaken and heartbroken to learn his wife has been having an affair. His suspicions lead him to fire Alfred, who has been unaware of his employer’s troubles, wrapped up as he is in anticipation of a date with his secret admirer that evening.

Alfred heads off to meet the mystery woman despite his shock at Matusheck’s decision. The evening holds another surprise for him, as he learns he and Klara have been falling for each other without knowing it.

Things come together on Christmas Eve at the Shop Around the Corner in a—yes, predictable—but nonetheless satisfying and appealing way.

The well-written script, together with the fine direction, result in a story told as much in the details as the broader scope of the plot. While often considered a holiday movie, it is ideal for viewing year-around with its feel-good nature, top-notch performances and timeless tale.

A good part of the charm is due to the genuine chemistry between real life friends Margaret Sullavan and James Stewart. In fact, it was Sullavan who, early in Stewart’s career, predicted he’d be a star and advocated for larger roles for him. Rumor has it Stewart was in love with Sullavan, who was married, and his feelings for her kept him from marrying until he was 41.

Director Ernst Lubitsch later would say of the film, “as for human comedy, I think I never was as good as in The Shop Around the Corner. Never did I make a picture in which the atmosphere and the characters were truer than in this picture.” One of the most popular directors of his time, he was known for his sophisticated style and use of innuendo, qualities seen even in this simple tale.

Lubitsch had purchased the rights to the Hungarian play Parfumerie and developed the script with the help of Samson Raphaelson, who had also worked with him on Trouble in Paradise and Heaven Can Wait. The two added “wit and humanity” by enhancing the plot and fine-tuning the characters. The end result was a balanced story with well-developed characters and a sentimental, yet not maudlin, tale of love.

Not long after the part was promised to Sullavan, Lubitsch met newcomer Ingrid Bergman, and was intrigued by the possibility of having her star in The Shop Around the Corner. No doubt Bergman would have brought grace and charm to the role, but in the end, Lubitsch didn’t lose with Sullavan.

The movie has been remade at least twice, including You’ve Got Mail, a loose adaptation that pays homage to the original by naming a bookstore key to the plot “The Shop Around the Corner.”