Eve Peabody (Claudette Colbert) is a showgirl escaping a run of misfortune in Monte Carlo by way of train to Paris. She arrives with twenty-five centimes to her name, and talks cab driver Tibor Czerny (Don Ameche) into driving her from venue to venue in an effort to find work.

It’s a failed endeavor, however, and Eve is left with nowhere to go, until Tibor offers his home, which she adamantly refuses. He’s insistent, and first chance she gets she escapes his cab and runs to the nearest open door.

Here she gains entrance to an event for the social elite by passing off a pawn ticket as her invitation. Once inside, she meets Georges Flammarion (John Barrymore) who has an enticing offer: lure dashing, single and wealthy Jacques Picot (Francis Lederer) away from Georges’ wife, Helene (Mary Astor). Georges will pay all expenses, including an extravagant wardrobe and luxury accommodations. 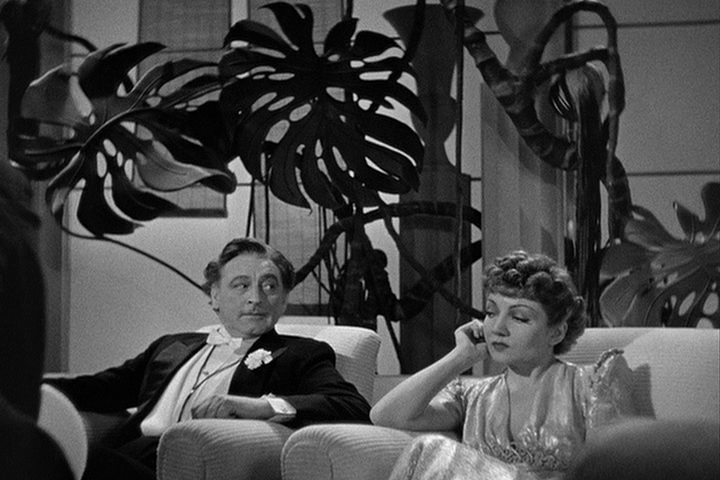 Of course Eve has already started to fall for Tibor, despite her best intentions, and she’s unwittingly complicated this fairy godmother situation by taking the name Baroness Czerny—as in wife of Tibor, who tracks her down after he learns of her deception.

This movie delivers all the wonderful fun a top-notch cast with a script by Charles Brackett and Billy Wilder promises. Claudette Colbert and Don Ameche perhaps don’t make an obvious pairing, although they did work on three films together (this one being notably the best), but the match works in sophistication, banter and sly humor.

The true delight—far from assured prior to production—is John Barrymore’s smart and affable performance. Barrymore was deep in decline due to alcoholism by this time, and was generally unreliable, unable to memorize scripts or even show up on the set. His wife, Elaine Barrie, had a co-starring role and is credited with helping keep him in check.

However, as noted by co-star Mary Astor, Barrymore was such a highly skilled actor that despite all his problems, he was “able to act rings around everyone else.” High praise, given the quality of the entire cast.

Astor herself was several months pregnant at the time of filming, although her character was not, and numerous clever means were used to hide her changing figure.

(A bit of background trivia—in 1924, a 40-year-old Barrymore had an affair with his co-star, then 17-year-old Astor, although the relationship faced severe constraints by her parents and eventually failed. By the time this film was made they were reportedly on good terms, each having survived a separate scandal or two in the meantime.)

This was also one of the first films as costume designer for the legendary Edith Head, who had previously been the assistant to one of Hollywood’s most popular designers, Travis Banton. Now on her own, she found herself constantly being challenged by Colbert, who herself had studied fashion design before turning to acting.

Today considered one of the top romantic comedies of the era, although surprisingly perhaps one of the lesser known, Midnight is everything it promises to be, and a must-see for classic movie fans.