Mortimer Brewster (Cary Grant) has just eloped with the girl next door, Elaine Harper (Priscilla Lane). Before leaving on their honeymoon, they stop to give the news to their respective families. For their part, Mortimer’s elderly aunts, Abby and Martha (Josephine Hull and Jean Adair, reprising their Broadway roles), are thrilled he’s finally settling down with the lovely Elaine.

But during his visit, Mortimer discovers his kindly aunts have taken on a new cause, that of releasing lonely elderly gentlemen from their earthly pain with a sip of poisoned elderberry wine. The morbid work of burying the bodies in the basement is done by deluded Uncle Teddy (John Alexander), who believes he’s Theodore Roosevelt, digging the Panama Canal.

About the time the full impact of his aunts “very bad habit” has begun to sink in on him, another blow is dealt to Mortimer—the return of his long-lost brother, Johnathan (Raymond Massey), along with Johnathan’s plastic-surgeon friend, Dr. Einstein (Peter Lorre). The two have their own body in tow, that of one late Dr. Spenalzo.

Johnathan isn’t from the same benevolent branch of the family tree as Mortimer and the aunts, and he plans to do them all in, one way or the other. 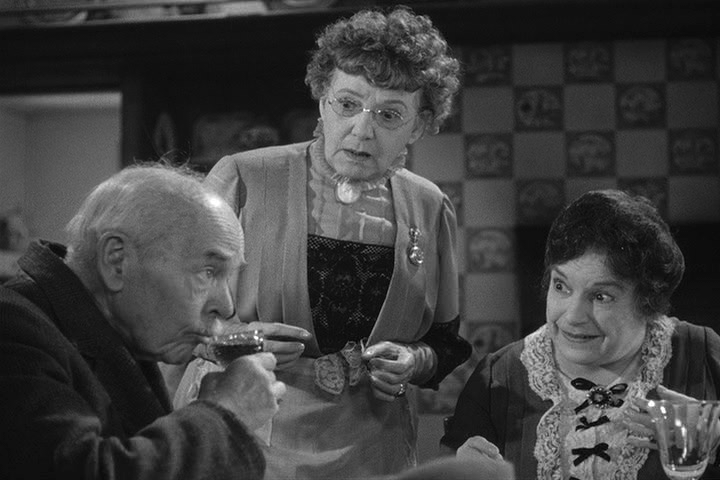 While this film features Cary Grant in one of his most over-the-top comedic performances, the strength of the dialogue is often in its dry and understated style. It’s a continued contrast of extremes throughout the story that keeps the humor fresh. There’s a lot going on in this macabre combination of screwball comedy/horror film, yet somehow, the story is cohesive and, despite the numerous plot twists, never overly contrived.

The rest of the cast includes such scene-stealing character actors as Edward Everett Horton, Jack Carson and James Gleason. In the end, the entire show lets loose, and it’s Mortimer’s own surrender to the situation that best sums up the whole zany scenario.

The movie was was originally filmed in 1941, in part because of Grant’s availability at that time, with the agreement it wouldn’t be released domestically until the Broadway run of the play was complete. It has been said to have been shown to serviceman overseas before its eventual 1944 release, but no official record of that exists today.

Frank Capra chose this project because it took him away from the “feel good” films he’d become known for and into a wacky plot with no particular redeeming value, save its dark humor and non-stop antics. It’s not a film fans of either Capra or Grant point to as pivotal parts of their careers, yet it remains immensely popular and a part of pop culture today.