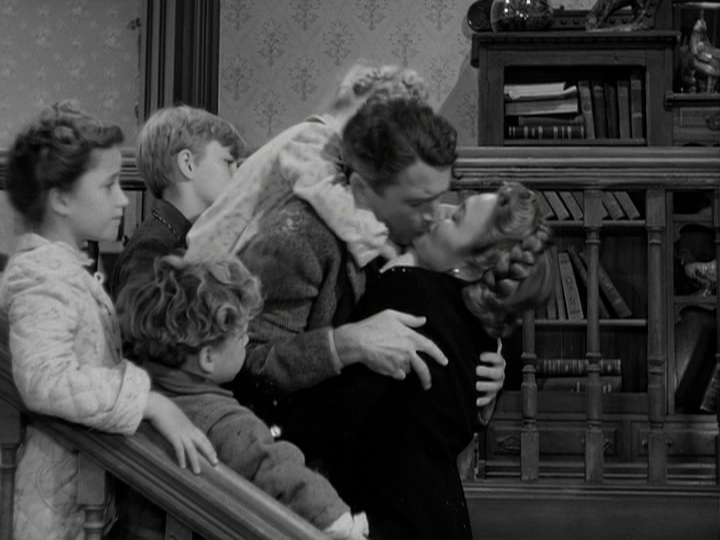 Local boy George Bailey (James Stewart) is at a crossroads, and how he got there tells more than one story. George has been a town hero since he was a boy and saved his brother, Harry, from drowning. Not long after that he prevented his boss, the local pharmacist, from accidentally poisoning a patient.

But it’s as an adult that George really makes his mark. His father Peter (Samuel S. Hinds) runs the local Building & Loan, the only institution in town able to stand up to the “richest, meanest man in Bedford Falls,” Mr. Potter (Lionel Barrymore). It’s loans from the Bailey Bros. Building & Loan that have allowed residents of Bedford Falls to move out of the local “Potter’s field” and into their own homes, and it’s the Baileys’ heart that has allowed many of the loans.

George has dreams of exploring the world, but those dreams are put on hold time and again. When his father dies, he takes his place in the family business and runs it with the same generosity Peter Bailey had. His expectation that his brother Harry will take over the business after he finishes college is shattered by Harry’s plans. On his way to his honeymoon with Mary (Donna Reed), he’s stopped by a run on the banks, including his business.

But the worst is yet to come. When his uncle Billy, his partner in the business, loses 8,000 dollars, George is desperate. The Building & Loan is at risk of collapsing, and because he takes responsibility for his uncle’s error, George is at risk of going to jail. In his distress George contemplates suicide.

But an unlikely hero is sent from heaven to help him. Clarence (Henry Travers) is an angel with his own problems, and the two join together to save the day.

Perhaps Frank Capra’s most famous film, It’s a Wonderful Life was a favorite of the director’s as well as James Stewart. While some criticized the religious element in the story, Capra downplayed any such influence. “The characters themselves had an idealism within them that eventually won out. They reached for something they had inside, and they came up with a handful of courage and wit, and they beat their adversaries with it. Not with prayer…people go into a theater to be entertained, titillated, inspired. But they don’t go in to hear a tract.”

It’s a Wonderful Life was nominated for six Academy Awards and won one for Technical Achievement. It lost Best Picture, Best Actor, Best Director and Best Film Editing to The Best Years of Our Lives, a film that had particular relevance for audiences at the time with its focus on the realities servicemen face after war. As popular as it was at the time, It’s a Wonderful Life has taken on a power of its own over the years.

There’s no doubt the message in the film is simple and straightforward, and perhaps that’s part of the appeal. As simple as it is, it also has a broad reach as anyone can superimpose the realities of their own life on those of George Bailey’s. A Christmas classic, yes, but a classic for any day of the year when any man is pondering the value of his own existence.