Summoned to work on one case, then turned around for the real story, hard-boiled private detective Philip Marlowe (Humphrey Bogart) finds more mystery—and murder—at every turn. It starts with his client’s sultry daughter, Vivian Rutledge (Lauren Bacall), who’s certain not all is as it seems in her father’s instructions for his investigation.

Her sister Carmen (Martha Vickers) has already made an impression on Marlowe, who dryly notes her frisky greeting to her father. Her wild reputation is confirmed when Marlowe finds her that evening drugged and hovering over a dead man, with no apparent concern for the circumstances.

He carries her back to Vivian’s care, then returns to investigate the scene he left, only to discover the corpse is gone. The body was apparently that of one Owen Taylor, who later is believed to have driven off a pier to his death.

Early on this movie establishes itself with racy talk and heavy-laden sexual innuendo, and the story is convoluted and challenging to follow. Critics then and now agree: you watch The Big Sleep for the dialogue, not the plot.

Time magazine’s movie critic wrote at the time, “The Big Sleep is wakeful fare for folks who don’t care what is going on, or why, so long as the talk is hard and the action harder.” In a 1997 review of the film, Roger Ebert wrote, “it’s unusual to find yourself laughing in a movie not because something is funny but because it’s so wickedly clever.” 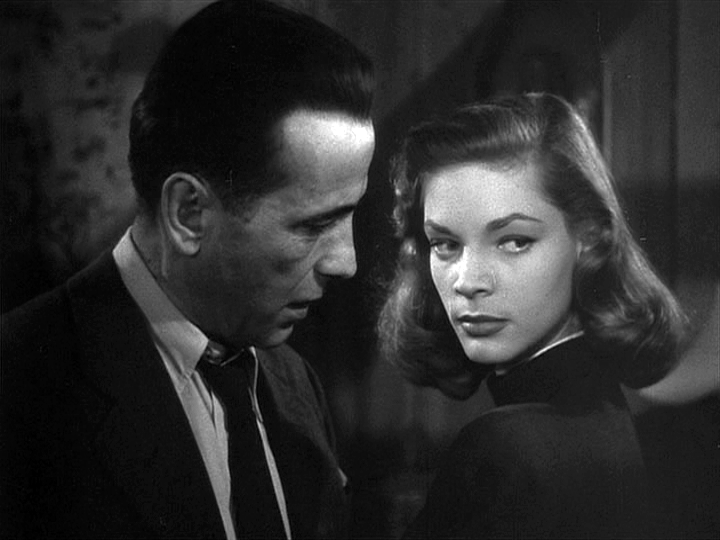 Based on the novel of the same name by Raymond Chandler, some questions about the plot go unanswered. In her autobiography, By Myself, Bacall recalled one day when Bogart asked, “who pushed Taylor off the pier?” Everything stopped, she claimed, for no one knew.

Biographers of both Howard Hawks and Chandler tell of the telegram Hawks sent to Chandler asking if Taylor was murdered or committed suicide. Chandler later wrote a friend, “dammit I didn’t know either.”

Yet that confusion doesn’t seem to matter with a movie that contains the famous and provocative “horse racing” conversation between Bogart and Bacall. For her part, Bacall claimed she was somewhat naÏve about the dialogue, not fully recognizing its sexual nature, but no matter. In real life the two were falling deeply in love, and the chemistry between them is palpable. (They married between the time production was completed and the film was released.)

While the movie was made to accent the chemistry between Bogart and Bacall, director Hawks didn’t approve of their romance. He and his wife repeatedly spoke to Bacall about the dangers of this intense relationship, and tried fixing her up with any number of other actors, including Clark Gable.

Hawks owned Bacall’s contract, and after The Big Sleep was completed, he sold it to Warner Bros. In short order, they increased her pay from $350 a week to $1,000.

The film was originally completed in 1945, but studio executives were said to be anxious to capitalize both on Bogart and Bacall’s popularity as a couple and Bacall’s image of smoldering sexuality, and didn’t feel there was enough of either element. In January, 1946 several new scenes were shot and a new version of the film was edited.

The 1945 version of The Big Sleep is only two minutes longer than the final, released 1946 version, but about twenty minutes of the actual scenes included in the film are different. A scene detailing the crimes being investigated was cut, as well as much of the footage that included Vickers, reportedly because some thought she was more sultry than Bacall.

A true classic, The Big Sleep is required viewing for all film noir fans and indeed, anyone interested in the magic of film making. Far from a typical murder mystery, it delivers a sharp, calibrated, sexy look at the people and process involved with solving a crime.