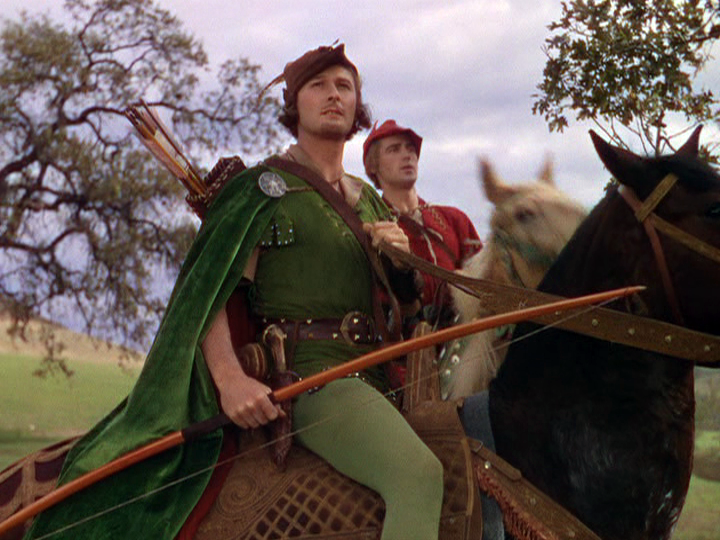 In the late 12th century, England’s beloved king, Richard the LionHearted, has been captured and imprisoned, giving his brother John reign of the land. Or so the story goes in The Adventures of Robin Hood, whose historical accuracy fails, yet its storytelling is timeless.

Opposing the Saxons and Prince John (Claude Rains) is Robin of Locksley (Errol Flynn), accompanied by his group of misfit followers. Prince John’s close companion and ally is Sir Guy of Gisbourne (Basil Rathbone), who has his eye on Lady Marian Fitzwalter (Olivia de Havilland).

The two foes match wits throughout the film as Robin seeks to restore Richard to the throne and defeat both Prince John and Sir Guy. Soon coming to Robin’s aid is the lovely Lady Marian, who has fallen for the dashing rogue. The feelings, it seems, are mutual.

Robin is nearly felled by the prince when he falls for a set-up at an archery match, which he handily wins in dramatic fashion. Immediately after, he is captured by the Saxons and scheduled to hang. Lady Marian will have nothing of it, however, and seeks out Robin’s men to relay a plan to free him.

It is when Richard attempts to take back the throne that a final showdown starts.

This classic adventure has lost none of its charm and character in the eighty years since its release. The score by Erich Wolfgang Korngold sweeps the tale along in a magnificent manner, the costume design is superb and the entire movie is rich with saturated color, lending an extra touch to the fairy tale of Robin Hood.

Originally set to star James Cagney, the studio eventually gave the role to Flynn. After the success of Captain Blood and the undeniable chemistry between Flynn and de Havilland, the part of Lady Marian seemed destined for the 21-year-old actress, who had quickly made a name for herself in Hollywood.

The scenes set in Sherwood Forest, known in the twelfth century for its density of oak trees, were shot in Chico, California in Bidwell Park, also lush with oak. The studio made good use of matte picture backgrounds for many of the scenes, another element conducive to the storytelling quality of the film.

Another carryover from Captain Blood was Rathbone, a match for Flynn in physique, style and fencing abilities. His look was well-suited for a foe of the hero, and his height and build made him visually a fine opponent for Flynn. Rains’ versatility as an actor is once again highlighted. He is barely recognizable from his characters in such films as Now, Voyager and Casablanca.

The sword fighting in the end of the movie was carefully choreographed by a well-known fencing master, who used proper fencing moves for most of the scene but deviated when the story required bigger, more flamboyant action. The precision of the sword fight between Flynn and Rathbone is a high point of The Adventures of Robin Hood.

Winner of three Academy Awards (Best Art Direction, Best Editing and Best Original Score), the movie was also nominated for Best Picture, but lost to You Can’t Take it With You.

Today this film is as much fun as it was when first released, slightly dated in insignificant ways, but like the legend of Robin Hood itself, timeless.