Vicki is torn between the two men, of course, but is also enjoying the attention of these jealous rivals. Both husbands had tended to put her second to their other interests, yet now she is their primary concern. It’s a heady feeling.

Eventually the thrill of being fought over dissipates, and Vicki finds herself faced with an impossible decision. It’s not helped by her husbands’ return to their previous camaraderie, and (unlike many films of the day) the lack of one clear “best” choice. 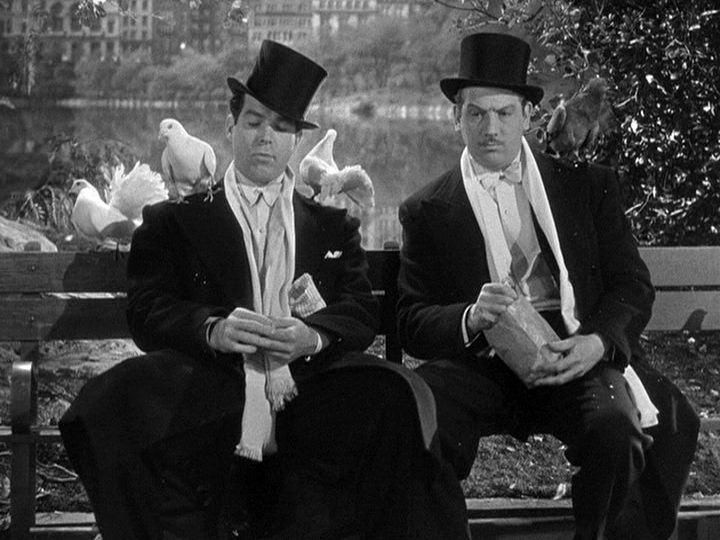 The plot is remarkably similar to another and more popular film released in 1940, My Favorite Wife. Not surprising, given that both were inspired by the poem “Enoch Arden” by Lord Alfred Tennyson. In fact, a multitude of films with the same basic plot had been made in the early days of silent films, many of them based on the play “Home and Beauty” by Somerset Maugham (as was Too Many Husbands)

This film is more ambiguous than most, which caused some problems with censors. The initial script was rejected by the Motion Picture Production Code, in part because Vicki was “impatient to indulge in marital privilege.” Such eagerness was not seen by censors as appropriate for the screen.

Compared to the near slapstick nature of My Favorite Wife, it is more subtle in its humor. The supporting cast plays an important role in the funniest parts of the film with their understated looks, gestures and comments.

The stars, Arthur, MacMurray and Douglas, were among the most popular comedy actors of the time. Douglas had experienced tremendous success the year before with Ninotchka, and MacMurray was a regular in screwball comedies. Arthur was experiencing a bit of a slump, something her husband worked hard to overcome. She’d been offered the lead in My Favorite Wife, but scheduling conflicts kept her from accepting that role.

This is an enjoyable film, particularly if you remain alert to the quieter kind of comedy it offers. It is a classic screwball theme told with a more sophisticated tone, and suffers a bit from the comparison. Still, it is a film classic movie buffs will enjoy.