Tennis star Guy Haines (Farley Granger) is on his way home when he meets a stranger on his train, Bruno Antony (Robert Walker). Bruno is eerily charming, and Guy quickly realizes he isn’t in his right mind. Despite his attempts to find another seat on the crowded train, Guy’s stuck talking to Bruno.

Bruno knows Guy is in an unhappy marriage, and he shares his own frustrations about his father. Then he moves on to discuss an idea that reveals him as the psychopath he is. Bruno will kill Guy’s wife, and in return, Guy will murder Bruno’s father. Criss-cross, Bruno says.

Guy brushes him off and forgets the encounter. His mind is quickly occupied by his wife Miriam’s (Laura Elliott) refusal to grant him a divorce. Miriam coarsely tells him she won’t let any man dump her, especially for another woman, in this case Anne Morton. Anne’s father is an U.S. Senator, and Guy is looking to a career in politics.

But Bruno was serious about what he saw as an agreement, and Miriam is soon dead. Guy is left in a psychological trap by his nemesis, and events catapult to the climactic final scenes. 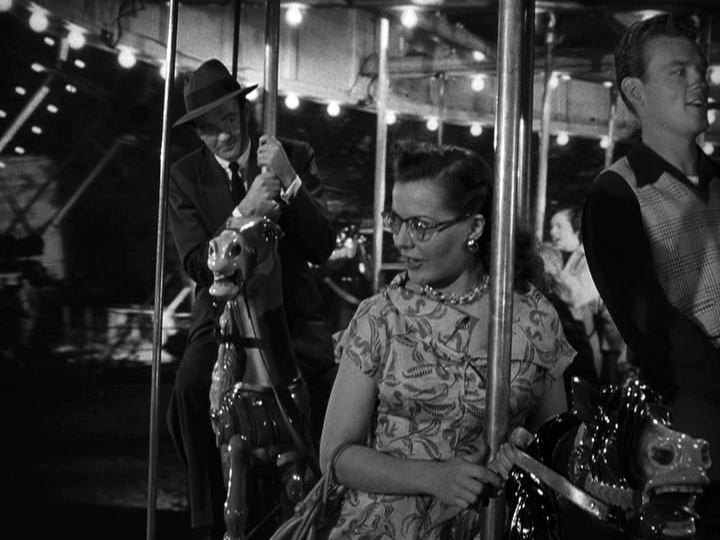 Granger wrote in his autobiography that after Hitchcock offered him his role, he surprised the actor by suggesting Walker for the part of Bruno. Up to that time Walker had been best known for his boy-next-door roles and alcoholic decline.

After an initial night of binge drinking and the subsequent blurry morning after on the set, Walker proved to be a professional, turning out a phenomenal, career-making performance. Sadly, he died after self-medicating with alcohol and drugs for a panic attack a month or so after the film was released.

The film was based on the popular novel of the same name, and Hitchcock searched long and hard for a screenwriter for the project. He initially hired Raymond Chandler, but their personalities and writing styles clashed to a point where Hitchcock fired the famed writer. Eventually the bulk of the writing was done by Czenzi Ormonde and two other women, although Chandler still got the writing credit.

Strangers on a Train was nominated for one Academy award, Best Cinematography. Hitchcock later was dismissive of the film, stating he was unhappy with the ending. Regardless, the movie remains popular with audiences and critics alike, and regularly inspires movies and television shows with the “criss-cross” theme, including the last episode of the television drama Law & Order to star Jerry Orbach.

Despite Hitchcock’s lack of regard for Strangers on a Train, it is a film with many of the elements that made him a master. The innocent or naïve leading character played against a creepy individual, the unexpected backdrop (in this case an amusement park) and the chilling finale.