Novelist Charles Condomine (Rex Harrison) and his wife Ruth (Constance Cummings) hold a seance one evening as part of his research for a new book about a homicidal medium. Inadvertently, the woman they hired, an elderly bike-riding character whose credibility is suspect, calls up his late wife Elvira’s (Kay Hammond) spirit.

Elvira isn’t sure what she’s doing back in the world of the living, but she plans on making good use of the opportunity to win her husband back. She’s only visible to Charles, although she handily proves her existence to Ruth. They turn to the woman originally responsible for bringing forth the spirit of Elvira, Madame Arcati (Margaret Rutherford), who maintains an offbeat enthusiasm for all things spiritual.

Soon this odd love triangle takes a turn, and Charles is further entrenched in a seemingly impossible situation. 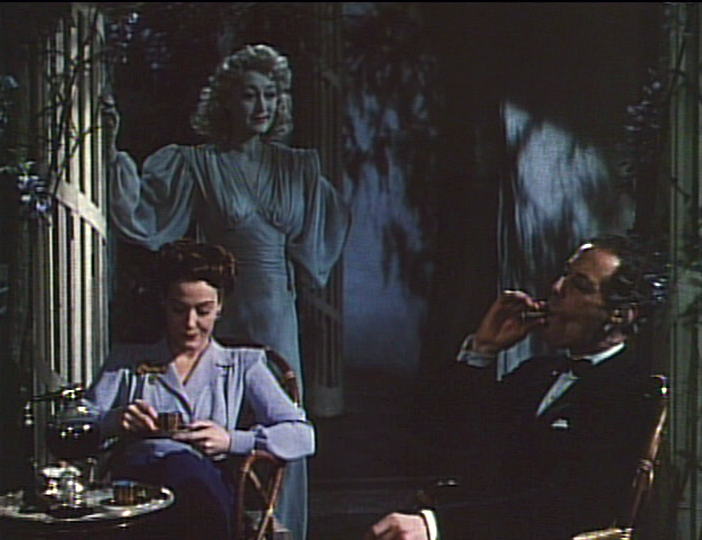 Based on the popular play of the same name by Noël Coward, this film was one of the few comedies for acclaimed director David Lean. Coward, who reportedly was initially very pleased to have Lean direct the film (this was the third of four of Coward’s stories he directed), is said to have been disappointed in the result. Harrison was no more complimentary, saying it was a “flat, a filmed stage play.” Still, the movie holds up today, and is now often included in retrospectives of Lean’s work.

That is perhaps in part because it was such a departure for Lean. He openly acknowledged he had no use for high-society, upper-crust stories, and sophisticated comedy was not his choice. Coward had encouraged him to step out of the box, however, something both perhaps came to regret.

Part of the problem was Coward’s insistence that the film basically be the play brought to the screen, without taking advantage of the opportunities film brought to the story. In one scene, Elvira is a driving a car with Charles as a passenger—only she isn’t visible to anyone but Charles. That’s something that could only be done on screen, yet it’s one of the few scenes “outside” of the play.

The movie won one Academy Award, for Best Visual Effects. It was well-received critically, but audiences on both sides of the Atlantic failed to respond in the same way. People found it hard to accept a movie about death so soon after the end of the war, and in America, the overt sexual way in which the film was publicized led to disappointment in the distinctly understated British humor. Over the years it’s gained a much better reputation, however, and remains a classic worth watching today.