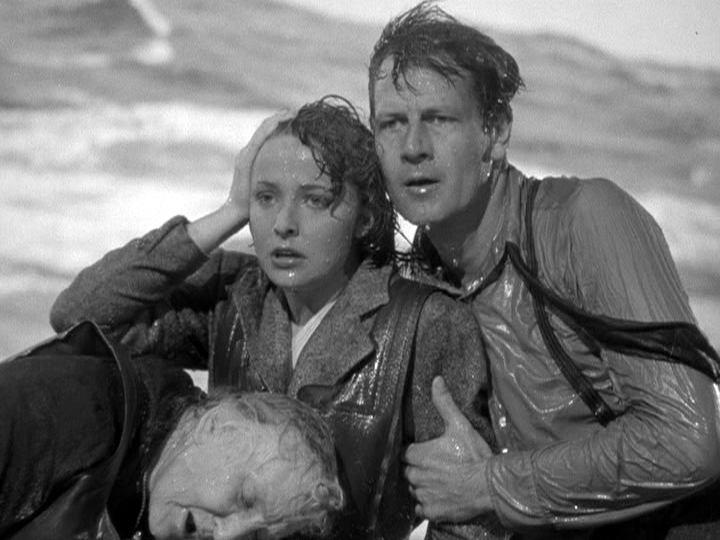 In August 1939, reporter Johnny Jones (Joel McCrea) sits at his desk making snowflake cut-outs while he waits to be fired. The summons from his boss arrives, but the message isn’t what he expected. Instead of losing his job, he is promoted to foreign correspondent in London. There he’s assigned the task of obtaining an interview with a man many believe is crucial to stopping war in Europe, Van Meer (Albert Basserman).

He’s also given a new name, Huntley Haverstock, by his editor. Before leaving for Europe, he’s introduced to Stephen Fisher (Herbert Marshall), who will be holding a luncheon for Van Meer shortly after Jones/Haverstock arrives in London.

On his way to that luncheon, Haverstock chances on Van Meer in the streets of London. He struggles to interview him in a shared taxi ride. Even less successful than that conversation are his efforts at charming Fisher’s daughter, Carol, whom he meets at the event. Much to his surprise, Stephen Fisher announces Van Meer was unable to attend as planned.

From there Haverstock is drawn into a whirlwind of shootings, windmills, love, lies and intrigue until the dramatic final scenes in a plane shot down by enemy fire. Helping him solve the mystery is fellow reporter Scott ffolliet (George Sanders), who spells his name without any capitalization in honor of an ancestor who was beheaded by Henry VIII.

Foreign Correspondent is ripe with humor despite its heavy subject matter and setting in countries on the verge of war. That’s due in part to dialogue written by Algonquin Round Table member Robert Benchley, among others. Benchley also co-stars in the film as a drunken, complacent reporter.

In addition to the fine writing, the special effects are remarkably compelling even today, more than 75 years and innumerable generations of advancement since. Most notably is the work done with the plane shot down by enemy fire. Its beauty is in its reality; there is no reliance on the melodramatic. The thoughts and emotions of the characters on board are easily communicated.

It was nominated for six Academy Awards, including Best Picture and Best Original Screenplay, but won none. That year’s winner for Best Picture was Rebecca, another Hitchcock film.

Hitchcock reportedly wanted Gary Cooper for the lead role, but Cooper turned it down, not wanting to star in a “thriller.” At the time, it was a genre that did not have the respect of many in Hollywood. Cooper later admitted to Hitchcock he regretted his decision.

The closing scene, with Haverstock giving a radio address while the city is being bombed around him, was shot after Hitchcock had visited England. He learned it was expected Germany would begin bombing London at any time. While the rest of the movie has only brief elements of patriotism, that scene is pure propaganda, aimed at an American audience not yet engaged in the war in Europe. At the time of the movie’s release, battles had been raging for months and losses were rapidly climbing.