After her father is convicted of being a Nazi spy, Alicia Hubermann (Ingrid Bergman) is drinking and ignoring the mysterious guest a friend brought to her home. When most of the guests leave at her insistence, this stranger, government agent T.R. Devlin (Cary Grant), stays. He sees past her tipsy state and reveals his intentions for meeting her: to meet up with an old friend of her father’s, Alex Sebastian (Claude Rains), and surreptitiously gain information about his activities. Along with some other suspected Nazis, Sebastian has set up operations in Brazil. Despite her initial protests, by playing on her loyalty to America, Devlin convinces Alicia to fly with him to Rio de Janeiro.

They quickly fall into a passionate romance, but that is put on hold while Alicia infiltrates Sebastian’s home and life. The plan becomes easier when he asks her to marry him—to prove she isn’t in love with Devlin. She is taking things further than she has been asked to do, and the situation begins to spin out of control.

Hitchcock later said that Rains and Bergman made a “great couple,” but their height difference (Rains was 5′ 7″, Bergman was 5′ 9″) proved difficult to film. Typically Rains would be standing on a box in their scenes together, but in one scene that trick wasn’t going to work. It was a long shot of the two of them approaching each other, and Hitchcock had a ramp built to compensate for the difference in height. To do so meant adjusting everything on the set proportionally, such as lowering pictures and raising chairs, so the scene played smoothly.

Bergman was said to have considerable influence on Hitchcock’s direction during the filming of Notorious, making suggestions for her performance that he uncharacteristically accepted and put in place. Typically Hitchcock had every move and every inflection sketched out before filming began and he did not tolerate input from his actors and actresses very well. Bergman, however, proved to have strong instincts for what would turn out to be one of her most lauded performances. 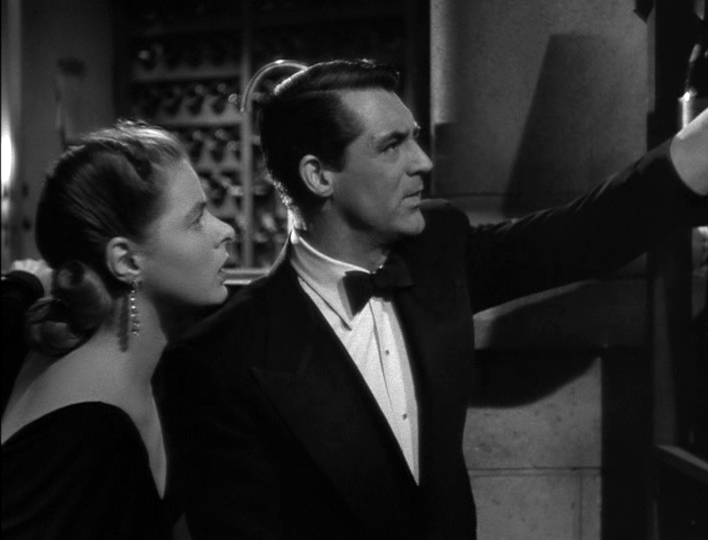 This was Grant’s second Hitchcock film (the first being Suspicion) and it was a more subdued role from his usual screwball comedy performances. He performed the part of Devlin as a man who held his cards close to the chest, someone who found it difficult to trust others. Devlin was in a business where trust and distrust were both required to be most effective, and he appeared to be shut down in his relationships with others.

Notorious received two Academy Award nominations, one for Claude Rains as supporting actor and another for Ben Hecht, who wrote the screenplay. It was also nominated for the Grand Prize in the Cannes Film Festival (the equivalent of the Best Picture award). It won none of those awards, but today is highly regarded as a timeless classic.

This is a film in which the cast, the script and the direction all come together. Performances by Bergman, Grant and Rains are among their best and three perform well together. For classic movie fans, it is a must-see.