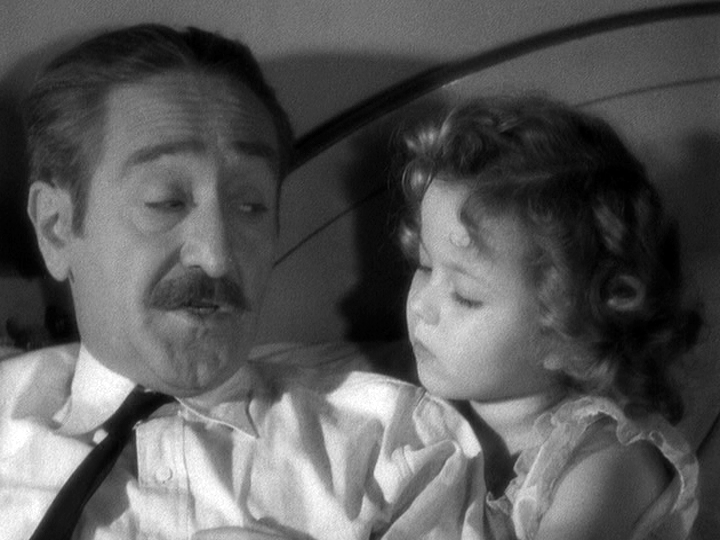 Anxious to place a bet but short of the cash to do so, a down-and-out man puts up his daughter, Marthy Jane (Shirley Temple), as a “marker.” He loses and in his despair commits suicide, leaving bookie Sorrowful Jones (Adolphe Menjou) with custody of the child.

Jones isn’t the only one left to care for her, however, He has an entire cadre of characters who pitch in, although he’s the one to rent a bigger apartment and buy her new clothes. One of those particularly interested in the girl is Bangles Carson (Dorothy Dell), a nightclub singer and girlfriend to gang kingpin Big Steve Halloway (Charles Bickford). In addition to her interest in Marthy—now known as Marky—she and Jones are starting to fall for each other.

But Marky is picking up some bad habits, and it’s up to her newfound role models to set her straight.

Little Miss Marker was based on a short story of the same name by Damon Runyon. The story was published in Collier’s magazine in 1932, and was centered on an idea Runyon had had for many years. In The Story of Damon Runyon, author Michael D. McClanahan writes: “Clear back in 1914, Runyon had his first inkling of the plot. Out for a stroll in New York one day, he parked his newborn daughter in her carriage in a pool hall while he went into the back room to place a bet with the bookies who officed there. When one of the pool players inquired of another about the presence of such an uncommon object in the establishment, the reply was simply, “Runyon’s marker.” Runyon overheard the remark and filed it in the back of his mind for future reference.”

Temple first auditioned for the role for Paramount but was turned down. As she recalled in her autobiography, Child Star, “they took one look, watched me dance and rejected me without a smile.” Her mother, never one to give up, arranged for a second audition with director Alexander Hall. Which went better. Temple recalled, “Hall auditioned me, first requesting that Mother wait in an anteroom. Unseen by him, she edged her chair close to the half-opened door, the brim of her hat just visible to me. Seated facing one another, Hall said, ‘Say aw, nuts.’ ‘Aw, nuts!’ I repeated. ‘Scram!’ he said. ‘Scram!’ I echoed. ‘Okay,’ he said, rising. ‘Okay,’ I continued with undiminished enthusiasm. ‘No, kid! Stop!’ he said. “We’re finished. Let’s go see Mother.’ It was as quick as that.” As a result, Paramount ended up spending $1,000 a week to Fox for Temple’s performance. Paramount later tried to buy out Temple’s contract, but Fox refused.

Temple recalled in her autobiography that playing the insolent and saucy Marky was a delight due to the forbidden behavior, and co-star Dell got a kick out of her performance as well. In fact, in one scene, where Bangles is trying to teach Marky some manners, shooting had to come to a halt while Dell burst into gales of laughter at Temple’s performance.

This was Temple’s first major role in a motion picture and established her as a star. The story line has done well over the years, too, the film having been remade numerous times under different titles. None of these remakes match the charm Temple brings.