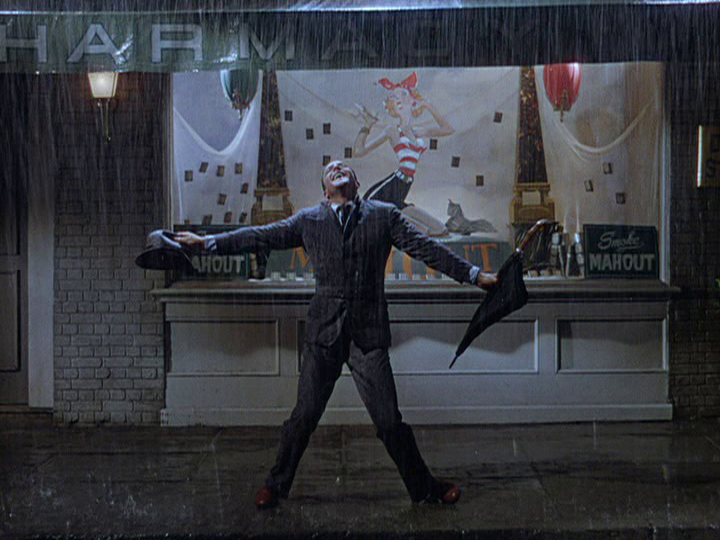 In 1920s Hollywood, there is no greater onscreen couple than Don Lockwood (Gene Kelly) and Lina Lamont (Jean Hagen). Offscreen is another story. Lina is inclined to believe her own publicity, which would have the two married soon, while Don tolerates Lina only on film.

After the premiere of their latest film, Don races to escape the horde of fans surrounding him and ends up jumping into the car of Kathy Selden (Debbie Reynolds), who isn’t a bit impressed by his star status and smugly makes it known she’s a stage actress. She drops him off, and the two go their separate ways. To the same destination.

Times are changing in the film industry, and at the premiere party, the head of the studio shows a short “talkie,” a talking motion picture, demonstrating the future of movies. The demo receives little attention, but much to Don’s amusement, Kathy Selden is part of the entertainment of the evening, jumping out of a cake as a chorus girl. He mocks her, and in her frustration, Kathy throws a real cake at him, hitting Lina instead.

Don is smitten, but it will be weeks before he catches up to Kathy again, this time at another production at Monumental. The two quickly become close.

When The Jazz Singer is a hit, Monumental decides Don and Lina’s next picture must also be a talkie. This wouldn’t be a significant problem to the two stars, except she has the voice of a comic shrew. Combine that with numerous technical difficulties, and the film’s preview is a laughable failure. Don, Kathy, and Don’s best friend, Cosmo (Donald O’Connor) stay up all night, stressing over the situation and how to make it right. Finally, in the wee hours of the morning, they hit upon an ingenuous plan.

Filming wasn’t easy for Reynolds. At 19, she had no formal dance experience, compared to the years of professional work by both Kelly and O’Connor. Reynolds found Kelly to be an exacting director and worked hard to live up to the standards he set. Famously, the “Good Morning” routine took fifteen hours to shoot, after which time Reynold’s feet were bleeding and her doctor put her on two day’s of bed rest. After all that work, Kelly went with the first take.

Kelly also made some unwelcome advances to his inexperienced co-star. Reynolds recalled their first kiss, the first day on the set, in her autobiography, Unsinkable: “The camera closed in. Gene took me tightly in his arms . . . and shoved his tongue down my throat.”Eeew! What was that?” I screeched, breaking free of his grasp and spitting. I ran around frantic, yelling for some Coca-Cola to cleanse my mouth.”

Comden and Green used only two completely new songs in the musical, “Moses Supposes” and “Make ‘Em Laugh.” The rest had all originally been used in other films, most of them from the 30s.

Singin’ in the Rain is justifiably considered one of the best musicals of all time, with a fun plot, talented cast and exuberant music. Not surprisingly, it was number five on AFI’s 100 Years…100 Movies (10th Anniversary Edition), a list of the top movies of all time.