Edna Kahly (Greer Garson) and her sister Charlotte (Marsha Hunt) are both to be married, hoping for a double wedding. But Charlotte’s prospective in-laws have discovered she was a foundling and refuse to allow the wedding to go forward. In despair, Charlotte commits suicide.

Soon Edna has married Sam Gladney (Walter Pidgeon), a Texas mill owner, and the two have their first child, a son. In the midst of their joy they learn from Dr. Breslar (Felix Bressart), who delivered the boy, that Edna can’t bear any more children.

Tragically, the Gladneys lose their son in an accident when he is still very young. To help with her grief, Sam and Dr. Breslar bring a little girl to her who is available for adoption. When Edna learns the child is available because her mother, a worker at Sam’s mill, can’t care for her and make a living at the same time, she comes up with a novel idea: to provide day care for the children of working mothers.

Not long after that, Edna learns of the difficulty the courts have placing foundling children, and starts a home, The Texas Children’s Home and Aid Society, where such babies can live until suitable parents are found. But she still faces many challenges in her work, including obstacles placed by “good” people in society, and the memory of her sister and the rejection she faced weighs on her.

This story of Edna Gladney was based on the true life efforts of the adoption advocate in the early 20th century. Appalled by conditions for society’s unwanted, especially children, she first worked to change housing conditions at orphanages and other facilities. She also was instrumental in removing the word “illegitimate” from birth certificates in Texas.

Blossoms in the Dust was nominated for four Academy awards, including Best Picture, Best Actress, and Best Cinematography, and won for Best Art Direction (Color). This was the second of seven Best Actress nominations for Garson (she won for Mrs. Miniver) and the first of five such honors in a row. 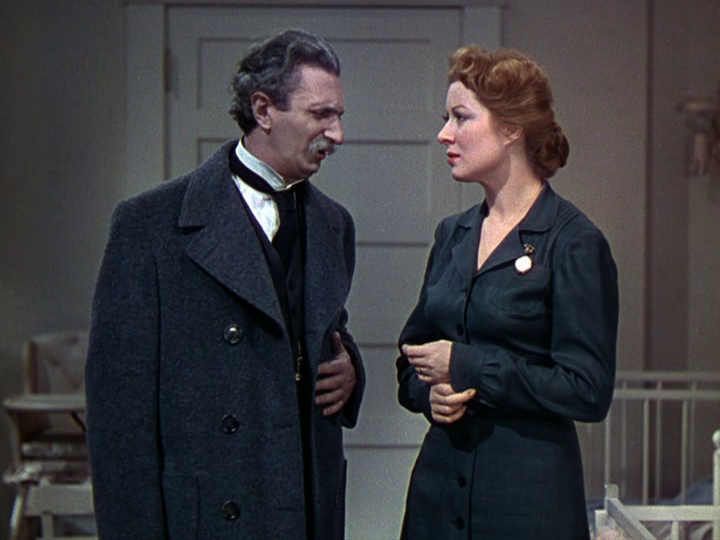 The decision to film Blossoms in the Dust in technicolor received some advance publicity when the studio produced a short that heavily featured Garson’s screen test. Screen Book magazine wrote, “Greer should be filmed in technicolor to do her justice. Black and white and gives no hint of the burnished tones of her mass of fine and fluffy hair, of the whiteness of her skin which portrays a natural redhead or the oval depths of her eyes.” Garson herself was a bit more reluctant. “I know my limitations well, and color can do terrible things to you,” she told Karl Freund, the cinematographer for the film.

Blossoms in the Dust is a sentimental tale kept from becoming maudlin by famed screenwriter Anita Loos. It shines a light on just how far we as a society have come in our treatment of the least among us, children without a home of their own.