Harry (Robert Young) and Tacey (Maureen O’Hara) King have a day-to-day challenge in keeping a nanny for their three rambunctious boys. After the last woman quits without notice, Tacey places yet another ad, hoping to find the right young woman for the job.

When a Lynn Belvedere answers and later accepts her job offer, she believes she’s found that woman. Both Harry and Tacey are shocked when a bristling Mr. Lynn Belvedere (Clifton Webb) arrives at the door, and are further bewildered when he makes the disconcerting statement he doesn’t like children. 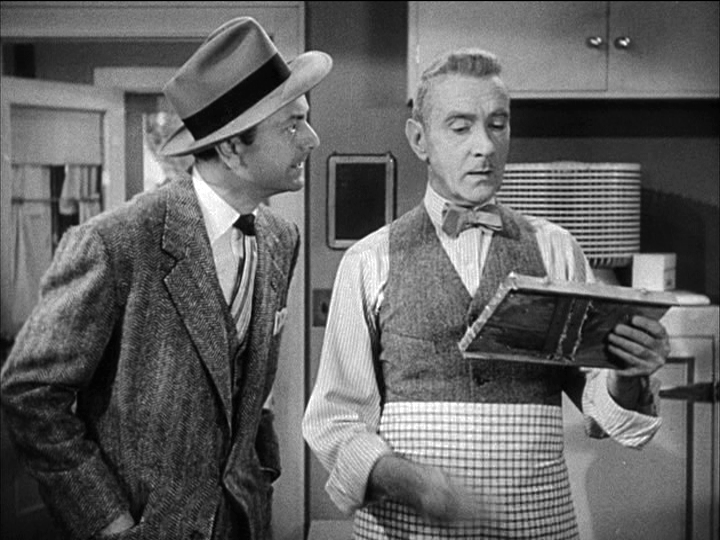 He does have a way with the boys, however, so the Kings keep him on, and eventually learn his kinder side. What they don’t know is his secret motive for moving in with a suburban family.

When the Kings—and the entire town they live in—discover the truth, it jeopardizes both home and profession.

The film was nominated for one Academy Award, Best Actor in a Leading Role for Clifton Webb. (He lost to Laurence Olivier for Hamlet.) This was Webb’s third and final Oscar nomination; he had previously received supporting actor nominations for his performances in Laura and The Razors’ Edge.

Webb, who had been a stage actor for years before making the transition to film, might seem a bit too stuffy to possess the fine dancing abilities he shows off in Sitting Pretty, but it was a talent he had been well known for on Broadway. As Mr. Belvedere, it’s simply another of the endless talents the man possesses.

You may recognize the image of the crying baby with a bowl of porridge upside-down on his head. A still taken from footage of that famous scene was made into a greeting card, and remains popular to this day. According to Young, the scene wasn’t in the original script, but was the result of a moment of exasperation on the part of Webb when the toddler wouldn’t cooperate while filming.

The film was based on the novel Belvedere by Gwen Davenport, which later inspired the 1980s television series Mr. Belvedere. The movie was so popular two sequels, also starring Webb, were made, Mr. Belvedere Goes to College and Mr. Belvedere Rings the Bell.

Webb created a character who was both caustic and endearing, a man whose alleged distaste for children is belied by their utter devotion to him. This is a funny, charming film, with its lead characters perfectly cast and a story line that remains fresh. It was immensely popular when released, and remains a favorite of classic film fans today. With good reason.