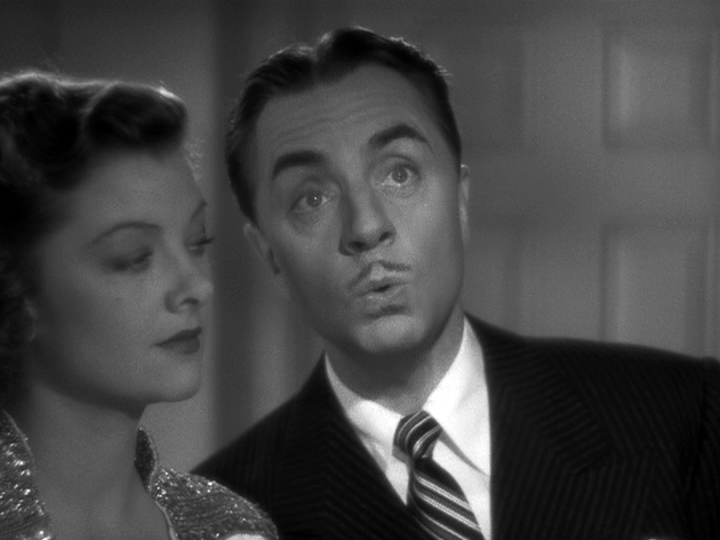 Staid teetolar Larry Wilson (William Powell), known for his “usual” of ginger ale and grape juice, has taken a blow to the head while trying to rescue a drunk who has fallen overboard. The man who comes to after this blunt trauma isn’t Larry, however, it’s George Carey, a con man who hasn’t been heard from for nine years.

Apparently an earlier blow caused amnesia in George, who took on the persona of Larry, totally unaware of his nefarious past. Larry is as reliable as they come, and his wife Kay (Myrna Loy) is weary of his predictability. She’s asked for a divorce, something Larry, now George, is determined to talk her out of pursuing.

Things start getting increasingly complicated, as layer after layer is revealed, and nothing is as it seems.

In an interview with the New York Post, Loy said, “Heretofore, I’ve always had to do the chasing after Bill. This time he has to chase me, and believe me, the chase is a merry one.” Merry, indeed, and fun to watch, as the emotional interplay between Loy and Powell is keen, with one-liners and sharp asides flying between the two, as do the sparks.

The critic for The New York Times spoke to those who may look for Nick and Nora Charles in this film: “Old family friends of the Charleses may sigh for their more suave and wordly airs, but certainly no one can complain that the new Larry Wilsons are less congenial or less delightfully full of surprises. For Mr. Powell and Miss Loy, no matter what their names, are one of our most versatile and frisky connubial comedy teams, and, given a script as daffy as the one here in evidence, they can make an hour and a half spin like a roulette wheel.”

The film was based on a story by Octavus Roy Cohen, a prolific and popular writer of the time whose racially-tainted stories haven’t survived. However, his private detective tales are credited with contributing to the establishment of that genre, and in addition to his stereotyping, he created the first black sleuth in popular media.

I Love You Again is a charming, amiable romp, with the clever back-and-forth between Powell and Loy that makes their films so worth watching. Perhaps not The Thin Man, but fun just the same.