Down on their luck and ready to go their separate ways, Florence “Florrie” (Judy Holliday) and Chet (Aldo Ray) Keefer stand before a judge (Madge Kennedy), asking for a decree of divorce. The judge, however, hoping the couple can remember what first brought them together, asks them to recount the story of their marriage.

What follows is an account of both gentle comedy and deep tragedy as the two struggle through the telling of this tale. 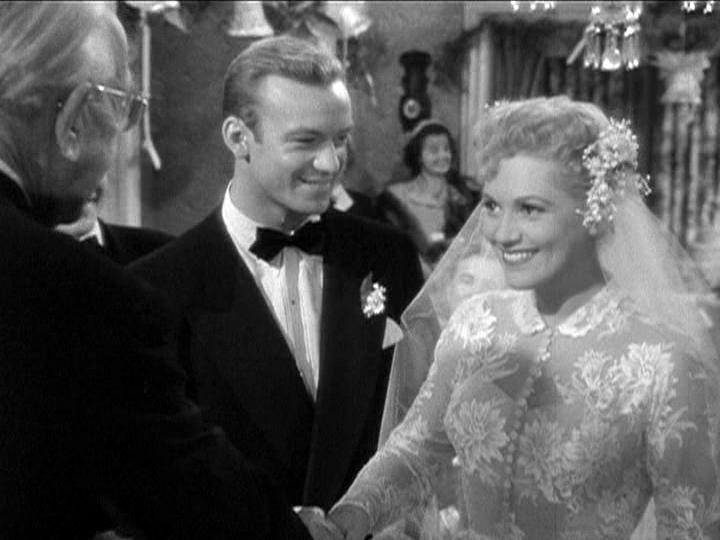 Written by the husband and wife team of Garson Kanin and Ruth Gordon, the story is complex and at times confusing. It’s difficult to discern the message, if any, about the role of women in marriage; the film doesn’t entirely present a stereotypical 1950’s way of thinking, yet in the end seems to fall back on just that.

Kanin later said that writing with his wife was difficult, as the two rarely saw eye-to-eye in how the story should be told. While their collaboration was effective in previous ventures, such as Adam’s Rib, it perhaps was best they made this their final joint effort.

That’s not to say The Marrying Kind isn’t worth watching. It is. Judy Holliday plays a character distinctly different from her earlier roles in Born Yesterday and others, in which she perfected the not-so-dumb blonde character. Florrie is capable and opinionated, yet also subject to the demands of her husband, which she gives in to out of love, not fear.

Chet, for his part, shows signs of both ingenuity and complacency, a man who could do more yet is easily discouraged by setbacks big and small.

The Marrying Kind was Aldo Ray’s film debut. Director Cukor later said of the actor, “He was a natural sort of actor with enormous individuality.” Ray went on to have moderate success in film and later television, although he never achieved what had been predicted for him at the start of his career.

While distinctly dated in some of its elements, there are timeless truths about marriage and family revealed between Florrie and Chet. Watch for a piercing question or two from their daughter, a character who makes a brief yet poignant appearance in the film.

The Marrying Kind is not a great film, but it is a good one, and worth the watch, particularly for those interested in the role of women in films of the era.