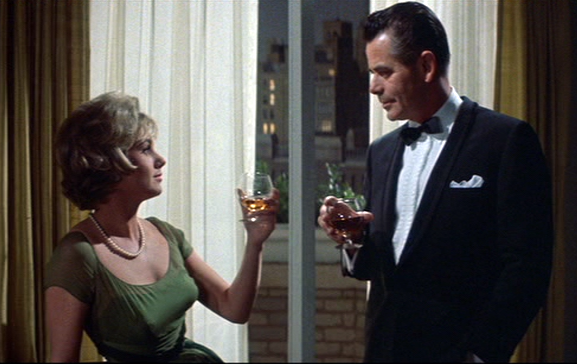 Recently widowed Tom Corbett (Glenn Ford) and his precocious son, Eddie (Ronny Howard) are making their way through life with their new-found status as bachelors. Eddie is openly on the lookout for a new wife and mother, while Tom more quietly keeps watch for the next Mrs. Corbett.

Living across the hall is their lovely neighbor and friend Elizabeth Marten (Shirley Jones), herself divorced, and the newest addition to the household is Mrs. Livingston (Roberta Sherwood), whose age and life experience give her the liberty of bestowing dating advice on Tom.

Tom and Eddie are meeting some attractive and intriguing women, but they don’t necessarily see eye-to-eye on the desirability of one over the other. Always willing to put in his two cents’ worth is Tom’s best friend, free and easy Norman Jones (Jerry Van Dyke), who tumbles into love with one of the women Tom meets while out for dinner with Eddie.

A heartwarming movie with engaging performances by all, The Courtship of Eddie’s Father works so well because you find yourself drawn into the lives of Tom, Eddie, Elizabeth and the rest. Ford’s laid-back, effortless performance gives you the impression you’re peeking into Tom Corbett’s life, not watching an actor on the screen, and Shirley Jones was never prettier, never kinder, never more alluring in her own wholesome way.

In addition to Jones, Stella Stevens and Dina Merrill play the women in Tom Corbett’s new life as a widower, and each are finely cast as the very different choices he faces.

Child actors come, and child actors grow up, but from time to time they give a timeless performance like the one Ronny Howard (who later shortened “Ronny” to become actor and director Ron Howard) gave here. Like Ford, he was at ease in his role, never giving away the hard work of making acting look natural.

The film did not fare well upon its initial release, perhaps because it was out of step with the times. Over the years, however, the gentle nature of the story has created a loyal audience. The movie and the book it was based on (the real-life stories of the author) inspired the TV series of the same name starring Bill Bixby and Brandon Cruz, which aired from 1969-1972 and, in its own manner, was as endearing as the movie.