A sharp psychological drama that has had feminists debating the nature of its leading lady’s motivations and decisions from the day it was released, Mildred Pierce is as provocative a mother/daughter tale as you’ll discover on film.

Set in sunny southern California, yet somehow dark in atmosphere and telling, this is the narrative of a woman who will sacrifice anything for her ever-ungrateful daughter. Mildred Pierce (Joan Crawford) married young and has two girls. As she explains it, this is the only life she knows. However, her husband Bert (Bruce Bennett) is out of work and apparently has an interest in another woman. After a particularly nasty fight one evening, he packs his bags and walks out, leaving Mildred alone to pay the bills.

Beyond the usual costs of keeping a home, Mildred has big dreams for her children that come with a price. She’s hired an expensive voice coach for her older daughter, Veda (Ann Blyth), and her younger girl, Kay (Jo Ann Marlowe) is enrolled in dance classes. What’s more, nothing will truly please self-absorbed Veda, yet Mildred is determined to give her everything she wants. 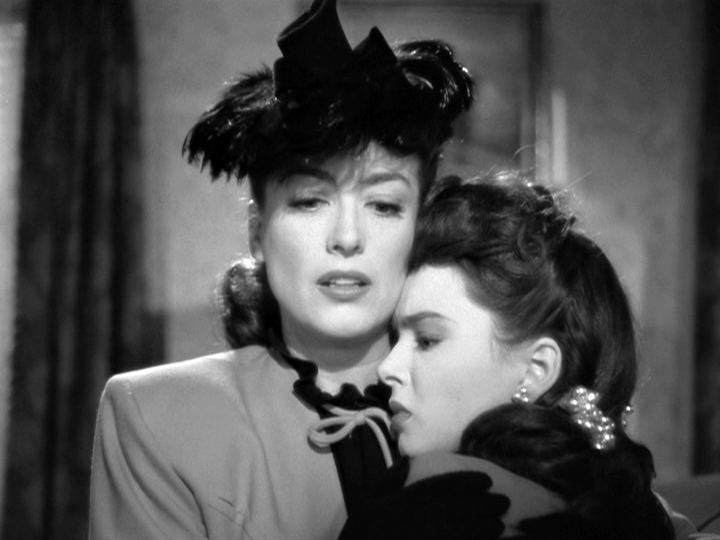 She turns to her friend Wally Fay (Jack Carson) for help with her dream of opening a restaurant. Wally finds a property owned by Monty Beragon (Zachary Scott) and arranges a deal with him that allows Mildred to open her new—and highly successful—place at a cost she can afford. Beragon, for his part, has fallen for Mildred.

What follows is a complex tale of confused relationships, a family’s sorrows and a woman’s choices in the face of losing odds in all she treasures.

Director Michael Curtiz had reluctantly agreed to Crawford’s unusual offer to do a screen test for the part after learning Barbara Stanwyck and several other actresses he sought wouldn’t be available. Despite his hesitation, that screen test quickly convinced him Crawford was the right choice. Still, tension remained between the two throughout production, and producer Jerry Wald often stepped in to mediate.

Not everyone had complaints about working with Crawford. Ann Blyth later recalled her as “the kindest, most helpful human being I’ve ever worked with. We remained friends for many years after the film. I never knew that other Joan Crawford that people wrote about.”

Crawford, whose career had been in a slump prior to this film, won the Academy Award for Best Actress in a Leading Role for Mildred Pierce. The film was also nominated for Best Picture, Best Actress in a Supporting Role (twice, for Eve Arden and Ann Blyth) Best Writing, Screenplay, and Best Cinematography, Black & White. (The Oscar for Best Picture that year went to The Lost Weekend, starring Ray Milland.)

After seeing the film, James M. Cain, author of the novel Mildred Pierce on which the film was based, sent Joan Crawford a signed first edition of his original book. The inscription read: “To Joan Crawford, who brought Mildred Pierce to life just as I had always hoped she would be, and who has my lifelong gratitude.”

Mildred’s role as wife and mother has long been debated by feminists. Analyzing it in that way, particularly in context of the times, is beyond the scope of this review. Interpreting motives in fictional characters is a difficult thing to do when singular actions in film may take place simply to move a story forward. However, as a well-played, complex character from that era, it doesn’t get much better than Mildred Pierce.