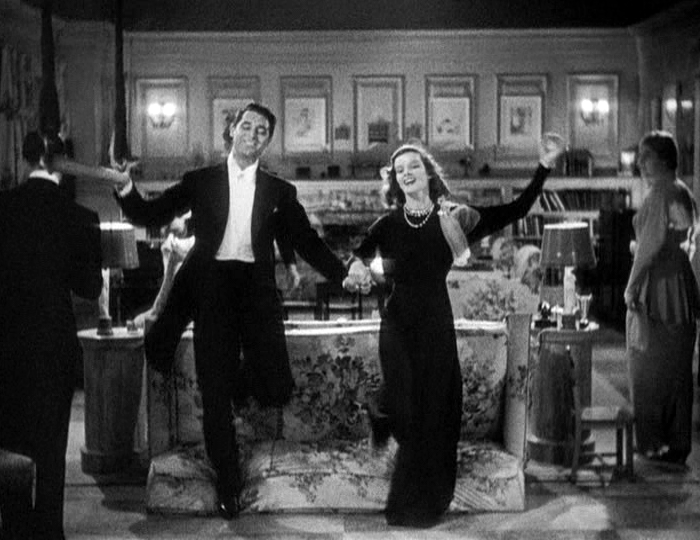 Johnny Case (Cary Grant), a hard-working, successful man, is engaged after knowing Julia Seton (Julie Nolan) for ten days. The two met while on vacation in upstate New York, and now plan to announce the happy news to their family friends. Julia is anxious to be married as quickly as possible, and Johnny doesn’t object.

They seem to be genuinely in love, but there is one major obstacle: Johnny’s carefree approach to life. Julia is set on Johnny joining her father’s firm and following in that esteemed man’s footsteps, but that isn’t what Johnny wants. Backing him up are Julia’s siblings Linda (Katharine Hepburn) and Ned (Lew Ayres), who share his untroubled view of the world.

Add to the mix Johnny’s close friends, the professors Potter (Edward Everet Horton, Jean Dixion), whose irreverent attitude match his own. Their support rivals his love for Julia, but his decision is clear.

Holiday was based on the play of the same name, in which Hepburn had been understudy for the role of Linda in 1930. Shortly after the film’s release, Philip Barry, author of the play, came to Hepburn with his latest work. That piece turned out to be The Philadelphia Story, one of Hepburn’s most iconic roles. The chemistry between Hepburn and Grant was also revisited in that movie.

Director Peter Bogdanovich later said that after the first time he saw Holiday, he left the theatre “feeling buoyant…positive about the vast possibilities of life.” He mused on the fact that this film, along with Bringing Up Baby, were not as popular at the time of their release as they have become: “As with clothes, quality lasts longer. We will be looking at [those films] a lot longer than numerous smash hits of that year.” Bogdanovich, who made films such as What’s Up, Doc in tribute to the comedies of the 30s and 40s, knows that of which he speaks.

This is a charming film, with a young Grant and Hepburn. Grant had not yet established his nervous persona, and Hepburn is neither edgy nor scatterbrained, qualities that filmmakers seemed to depend on in their later work. Instead, they are fresh and refreshing in a comedy that pokes fun at the upper class and asks the question, “why not?” in relation to the pursuit of happiness.