One time professional tennis player Tony Wendice (Ray Milland) has discovered his wealthy wife Margot (Grace Kelly) has been having an affair with crime writer Mark Halliday (Robert Cummings). Rather than confront his wife, he decides to blackmail a former college classmate and petty criminal, C. A. Swann (Anthony Dawson), into murdering her.

Tony has gone to a lot of trouble to set up the murder, first by stealing his wife’s handbag, which holds an incriminating letter, then anonymously trying to blackmail her into claiming the missive—actions he plans to pin on Swann. For one year he has taken small amounts of cash out of his bank account and saved the money so he can pay Swann. He’s also followed him to gather information he can hold against him. His plan for murder is detailed and, in his mind, foolproof.

On the night in question Tony is at a party with Mark, intending to use him as an alibi. That part of the plan works, however, the rest goes horribly wrong. Tony’s quick thinking in the aftermath has dire consequences, and Margot is once again in peril. 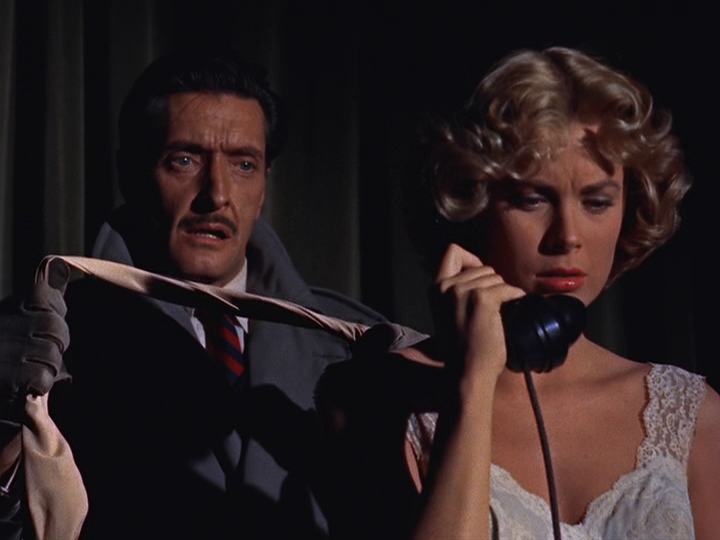 Dial M for Murder was not Hitchcock’s favorite film, nor was it his best. It is, however, a classic crime drama, with Milland deftly playing the quietly creepy Tony Wendice and Cummings portraying the much more likable paramour. Kelly was the standout in the film, and it’s no wonder Hitchcock chose to work with her again in two more films, Rear Window and To Catch a Thief.

The film was initially intended to be a 3-D feature, but was soundly rejected as such by audiences. After only a few showings in which the audiences repeatedly walked out, the theater manager contacted the studio and requested permission to show the film without the 3-D special effects. His wish was granted, and Dial M for Murder was effectively the last film made with that technology in the 50s.

Hitchcock later pointed out some of the subtle ways he used to move the story forward. Fearful that the “unity of emotion” might be lost in a traditional courtroom scene, he chose to focus on Kelly’s face against a natural background with color lights revolving around her. He also chose another, even more subtle way of expressing emotion in Kelly by dressing her in very bright colors in the beginning and gradually making the clothing more somber.

While Dial M for Murder may not have been Hitchcock’s favorite film, it remains popular with audiences who enjoy a movie focused on dialogue rather than action. It is a memorable film, one that fans of classic films should be sure to see.