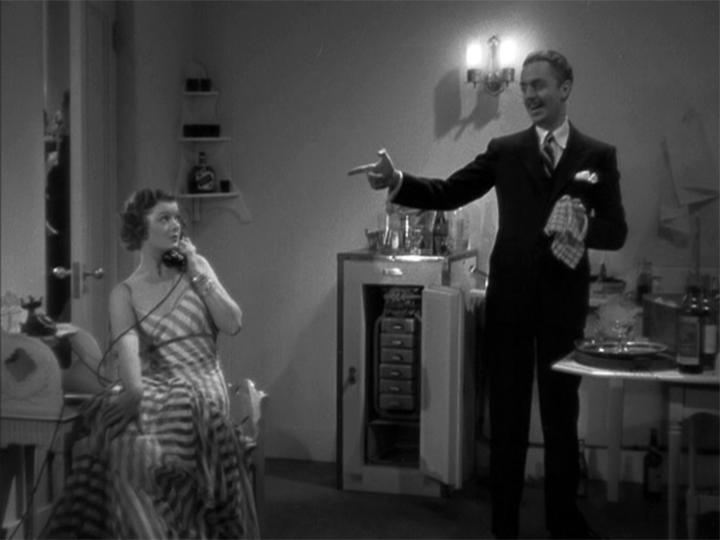 Nick Charles (William Powell), a retired detective with a droll wit, is a man who’s happy  now to live on his wife’s fortune and, well, drink a lot. Nora (Myrna Loy), for her part, is a classy, sassy woman capable of keeping up with her husband in both drinks and saucy banter. Joining the two in their convivial life is Asta the dog.

(It’s important to note this movie was made two years after the end of Prohibition, so the Charles’ drinking likely was looked upon in a different light.)

Despite his contentment in retirement, Nick is drawn into a murder case by the daughter of a long-time friend, Clyde Wynant (Edward Ellis). Wynant has abruptly disappeared, and the appealing Dorothy (Maureen O’Sullivan) pleads with Nick to look into it. Nick is eventually persuaded to take on the case by both Dorothy and Nora, combined with a gut feeling the police were on the wrong track. .

This story goes down a winding path and brings in a long list of viable suspects. Nick, in his dry, observational manner, notes key elements the detective misses. Ultimately, he leads them to the skeletal remains of the murder victim.

The group of suspects is brought together at a dinner party in the Charles’ home, where Nick skillfully pares down the list until the guilty individual is revealed.

This was the second of 14 films Powell and Loy would make together, including the six in the Thin Man series. Their chemistry was immediate and never failed. They are known today as one of the best onscreen couples in cinematic history, well-matched in the pace and timing of their repartee and delivery.

Powell freely admitted his detective skills were limited to his onscreen performance. “I’ve never solved anything in my life,” he said, “not even high school algebra.”

While his and Loy’s sly performances are key to the success of the film, the numerous Damon Runyon-esque characters play an important part in the overall feel of a fine mystery.

The screenplay was based on the immensely popular novel of the same name by Dashiell Hammett, one of the most highly-regarded mystery writers of all time. The adaptation was written by the husband/wife team of Albert Hackett and Frances Goodrich, who were also responsible for the screenplays of numerous other notable films, including It’s A Wonderful Life and Seven Brides for Seven Brothers.

The Thin Man was nominated for four Academy Awards, including Best Picture, Best Director, Best Actor in a Leading Role, and Best Adapted Screenplay. These nominations were a somewhat remarkable feat and a tribute to all involved in the production, as studio executives had low expectations. The movie was given a “B” movie budget (read: small) and a short time frame for completion.

Contrary to popular belief, “The Thin Man” refers to the murder victim, not Nick Charles. However, that name caught on and was used in the title of every other film in the series. It took three years for the next in the series to be made, the equally fun After the Thin Man.